The Gateway City Vol. 1 Kickstarter campaign is now in its final two weeks. It's been a thrilling 15 days, with the book reaching its funding goal in the first 26 hours and steaming on towards stretch goal after stretch goal since. The first 3 stretch goals have been unlocked, and what stretch goals they are! 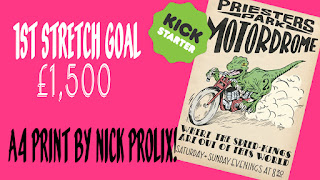 First up was Nick Prolix's brilliant print featuring the motorbike races at Priester's Park. Nick is a fantastic bloke and a remarkable cartoonist and writer. His series, Slang Pictorial, is one of the best comics I've ever read. 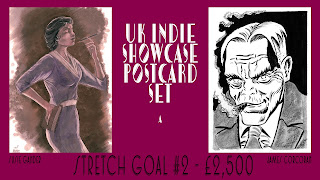 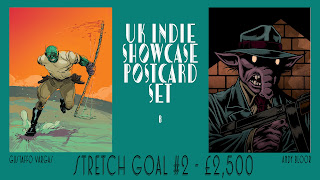 Second is a series of UK indie comic postcards featuring characters from Gateway City and designed by some of the best and brightest of the UK indie comic scene. Those bright lights are composed of Susie Gander, James Corcoran, Gustaffo Vargas and Andy Bloor. I love these cards. 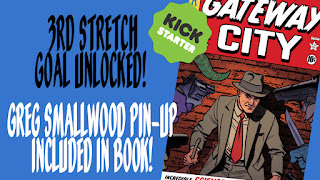 The 3rd stretch goal is the inclusion of a covers gallery in the trade paperback which includes a pin-up by Marvel comics artist, the great Greg Smallwood. I'm over the moon that Greg agreed to produce a pin-up featuring Lundy and designed to look like a title from the 50's EC comics publishing line. The next stretch goal is to produce Greg's pin-up as a print for all physical backers. I hope we get there, because I desperately want this image on my wall!

As well as maintaining the Kickstarter campaign, I've been doing the rounds on a few podcasts and plugging the book on a few sites, including Tripwire, Bleeding Cool and Fanbase Press. It's been a blast to talk to so many people about something that started so quietly and personal for me.

Here are the two podcasts:

First up is a chat with the fine people over at Spoiler Country  Due to the time difference (Spoiler Country records from Seattle, Washington), I very groggily got to talk about the book, 80s influences and Cardinals baseball. A lovely chat and some lovely people. Thanks guys!

Second was an artist spotlight with comic artist and illustrator, Pete Taylor, for the Lakes International Comic Art Festival podcast. We talked about one of my heroes, Steve Purcell and his seminal work, Sam & Max. Great to talk to Pete and very much looking forward to meeting in person later in the year at the festival.

Finally, I've been working on a handful of extra pages for the trade paperback. Just finished the inks on the last page this afternoon. But for those interested, here's me inking on the penultimate page: