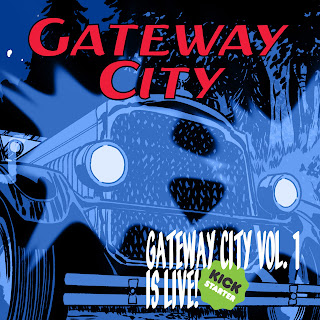 August has arrived and with it the launch of the Gateway City Vol. 1 Kickstarter Campaign. Vol. 1 is a collected trade paperback of the first 4 issues of the sci-fi noir comic I've been making over the last year-and-a-half. The collected edition will feature a few new scenes and has been re-edited by John Freeman of Downthetubes.net, Marvel UK, Titan Comics, and many many others. I couldn't be more excited to have got the chance to work with John brushing up the script and keeping the story taut. Many thanks, John. I'm also thrilled to announce that former Marvel Comics editor, Roy Thomas is on board to write a foreword for the book. Roy has worked in comics since the mid-60's and currently edits the Golden and Silver age comic magazine Alter Ego as well as works with Stan Lee on the Spider-Man newspaper strip. He's also a fellow Missourian. When I started getting into comics in the late 80's early 90's, I read not just comics but history books about comics. Knowing that someone from Missouri could go on to lead the mighty house of ideas meant the world to me. So grateful to him for agreeing to be a part of this book. 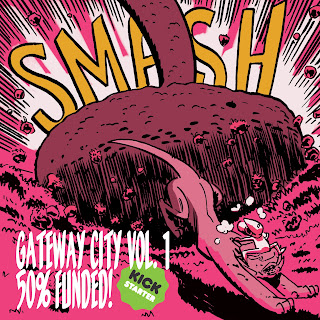 As I'm writing this, the campaign has just passed the 50% funded mark. I couldn't be more humbled by the support we've had on our first day. Thank you to all of you who've backed it, shared it and sent me messages of support. It's been a helluva day. Thank you.

If you'd like to join the Gateway Gang, swing on by the Kickstarter page and have a gander at the wares.