It's Emily* here today, updating the blog as the Gateway City Vol. 1 Kickstarter campaign enters its final 35 hours. Russell would be updating this, but he is super busy answering your questions and putting together the final images for the very recently unlocked Stretch-Goal of a 20 page, A5 sketchbook containing stuff from his journals, a four page comic previously published in Dirty Rotten Comics #11, pages from the first version of Gateway City and other odds and ends.


For those of you who have not been avidly watching the campaign, then this is just the latest of five stretch goals which have been unlocked. Russell talks about the previous four in his last update but for ease (and temptation) I'll leave this image here...

If you are interested in the sketching/inking process, the Kickstarter page has a great video of Russell from a Kickstarter Live he did on Monday of this week, in which we see him ink an alien mugshot from The Friendly 10 Club reward. There are only a few Mugshots left now as well, so get in quick (personally I love the mugshots, so the more he has to draw the better). 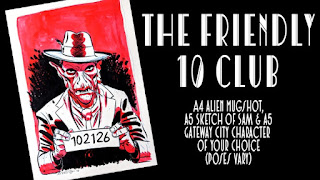 Anyway I'll leave the link here again, just in case your appetite has been whet:


Thanks again to everyone for all of the support, encouragement, sharing and kind words. It's been an exciting month for the comic, but most importantly, we've made some amazing friends. Thank you!

* Russell's long-suffering wife, for those who I haven't met me yet. 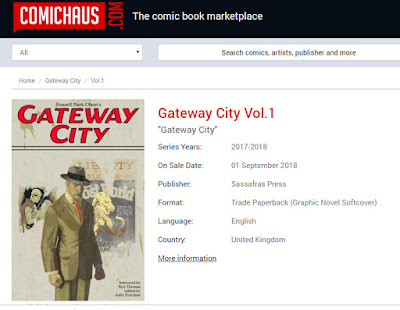